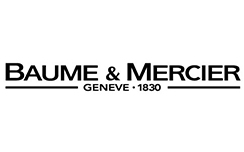 Also known for its complication watches, Baume & Mercier has excelled in the art of watchmaking with its chronographs, minute repetitions and chronometers.
Baume & Mercier also filed a large number of patents that have since fallen into the public domain for inventions such as the one named "Planetary Rotor" in 1965, designed to fit extra-flat automatic timepieces.
Made in Switzerland since their foundation, Baume & Mercier watches have constantly won awards at the various international Exhibitions or competitions launched by chronometric observatories. In 1919, the firm was awarded the famous "Poinçon de Genève" or Geneva Hallmark, a token of exceptional craftsmanship and quality.