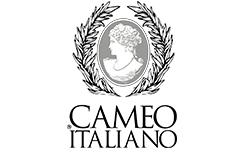 The di Luca family has a special bond with the art of the cameo, which spans entire generations. A story of passion and respect for traditions which began in 1957, when Michele di Luca, thanks to the ability of the most talented master engravers, realised his most beautiful dream: bringing the uniqueness of the cameo on seashell in the international scene conquering the foreign market in a very brief time span. Since then there have been, and continue to be, a string of successes, prizes, awards, even from the Naples Chamber of Commerce, as well as a gold medal awarded to Michele di Luca for contributing to the economic development of the region. His children Gino, Anna, Pina and Marinella also fell in love with this art form and in 1980, the cameo also became their lives’ pursuit when they made the decision to enter the company and offer their different skills and enthusiasm. Furthermore, in 2012 Gino distinguished himself by launching a brand that has made the cameo into a modern, nay, timeless piece of jewellery: CAMEO ITALIANO is the emblem of an Italian artisanal craft that knows no bounds.
Items